Life was good. I had a wonderful family, including three terrific teenage boys. I was just nominated as one of the top ten teachers in Arizona. I had helped my school attain national recognition and had recently attended an award ceremony in Washington, D.C. And then it happened. 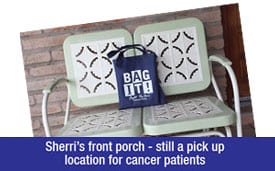 In November 2000 and two weeks following a “redo” diagnostic mammogram with no word from my doctor, I called the pathologist. He reluctantly confirmed my worst fears: I had breast cancer. (My mom had been diagnosed just two years before.) I came home, propped myself up along our patio wall, and wailed. I mean, WAILED. Feelings of devastation, loneliness, and desperation all washed over me. I remember thinking, “I may not live to see grandchildren!” To a kindergarten teacher, that is real pain.

As an educator, I began gathering information to help me cope with my diagnosis and impending treatment. My doctors gave me information about my tumor and treatment plan, but how was I to handle all this? For a woman who was so on top of things before, I felt powerless. 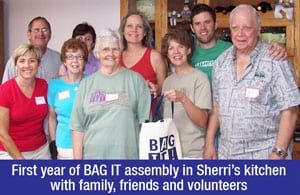 I managed as best as I could and switched roles with my mom—she was now my caregiver. It took three surgeries in ten days to remove the cancer, and I was a fierce advocate for myself throughout my treatment—always asking many questions. After chemotherapy, I came to the realization that this coping problem existed not only for me, but other patients, as well.

About a year later, I attended an advocacy-building retreat for cancer survivors. I was sent by my oncologist (and now good friend and a founding member of Bag It), Dr. Don Brooks—one of those astute guys who really knows their patients. It was there that I met Susan Leigh, a founding member of NCCS (National Coalition for Cancer Survivorship). Susan became my advocacy mentor. 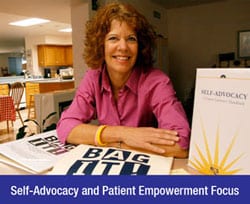 And my focus became clear: I wanted to help make a change. I wanted to help empower others to become self-advocates and deal actively with the overwhelming fear that results from a cancer diagnosis.

Bag It was conceived to help Fight the Fear. It has evolved over the years, but always has retained its vision: To help people and their families cope with cancer and engage in their care. 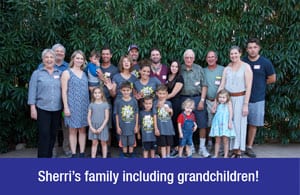 In 2010, wanting to give back to the cancer advocate community, I conceived and developed the concept of our ESCAPE to Thrive leadership conference. It is a unique annual conference experience for a select group of outstanding advocates from across the country. ESCAPE (Encouraging and Sustaining Cancer Programs and Efforts) aims to Educate, Support, and Empower these advocates to discover ways to improve their outreach and patient education in current and trending areas of cancer diagnosis and treatment in their communities nationwide. It also uniquely addresses compassion fatigue and advocate burnout both professionally and personally. It has been a delight to see the program grow and flourish.